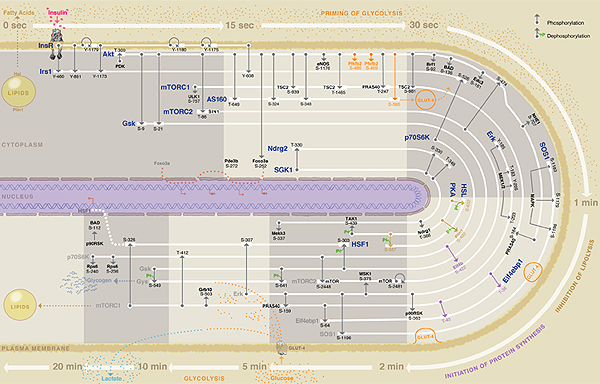 What can 21st century scientists learn from a 19th century French cartographer who drew a figurative map representing the successive losses of French troops during Napoleon Bonaparte’s Russian campaign of 1812-1813?

Plenty. The map by Charles Minard is regarded as one of the greatest data visualisations of all time because it represents six layers of data in two dimensions: the number of troops, distance, temperature, latitude and longitude, direction of travel, and location relative to specific dates.

Garvan and CSIRO biodata visualisation expert Dr Sean O’Donoghue was inspired by Monsieur Minard to borrow his concept in a representation of what happens when insulin strikes the surface of a fat cell.

That intricate ‘biodata visualisation’ is now published online today as a ‘Snapshot’ in the journal Cell.

Two years ago, Dr O’Donoghue, his student David Ma, and designer Christian Stolte were tasked with representing a breakthrough study undertaken at Garvan that charted the path of insulin action in fat cells like never before.

Dr Sean Humphrey1 and Professor David James2 had demonstrated the staggering complexity of intracellular events that happen once insulin makes contact with its receptor on the cell surface. See the original media release about the finding.

“Until this study, we did not really appreciate the scale and complexity of insulin regulation,” said Professor David James at the time.

“When insulin is released from the pancreas after we eat, it travels to cells and initiates a cascade of protein phosphorylation, literally tens of thousands of interactions, some instantaneous, some taking minutes or hours. The process is so precise and intricate, and at the same time so monumental in its scope, that it’s truly astounding.”

And that’s where Napoleon comes in.

Dr O’Donoghue loved the simple, elegant way that Charles Minard represented the depletion of Napoleon’s army over time. “We borrowed the idea of a journey from Minard because insulin signaling is essentially a journey into the cell, ultimately switching it from an energy-burning to an energy-storing state” he said.

“Minard mapped time onto geography and temperature – events such as river crossings and extremely low temperatures caused many deaths.”

“We mapped time onto cell topology, showing the cascade of signals that leads to changes in gene expression and the movement of key proteins around the cell.”

A central challenge was to select the most critical components of the journey and represent them clearly.

“When you create network diagrams in biology, you can end up with ‘hairballs’, processes that are so complicated that it’s impossible to work out what’s going on,” said Dr O’Donoghue.

“This happens so often, there’s a tongue-in-cheek ‘omics’ term – the ‘ridiculome’ – that describes it.”

“Happily the James lab clustered the tens of thousands of ‘phosphorylation’ events into ones that happened early, and others that happened late. They also selected a few pivotal proteins as our focus. That clustering is the basis of what we’ve used.”

O’Donoghue and colleagues used Minard’s principle to create a layout that avoided the ‘hairball’ and ‘ridiculome’. They included racetracks, each grouping together all events related to one protein – and dubbed their layout ‘Minardo’, acknowledging its inspiration. Click here to see the interactive version of Minardo.

At a glance, you can see which protein phosphorylates which other protein. You can also decipher causality – for example, when protein AS160 is phosphorylated, it interacts with GLUT4 vesicles, which then move towards, and fuse with, the outer membrane, allowing the cell to take up glucose.

Move your mouse over each event in the Minardo map and be rewarded with a succinct summary of its role in the chain of phosphorylation events.

Snapshots such as this, which appear in Cell, each focus on a single complex biological process conveyed in a very condensed form. “It takes a lot of work to communicate accurately such complexity in a simple way,” concluded Dr O’Donoghue.

1. Dr Sean Humphrey is now a postdoctoral fellow at the Max Planck Institute of Biochemistry in Munich.

2. Professor David James is now based at The University of Sydney and holds the Leonard P Ullmann Chair in Metabolic Systems Biology at The Charles Perkins Centre.