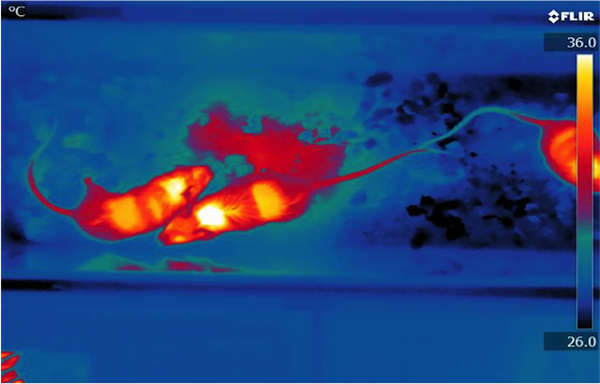 In a new study, Australian researchers have uncovered a way our brain keeps us safe by helping us maintain a stable weight - and what it does when things go awry. The findings, uncovered in mice, reveal how we might rev up the brain’s ‘panic switch’ for good in the face of an obesity crisis.

Sometime we eat too much and sometimes too little, but our body has a way of making sure it balances out. Our bodies know that survival is about consistency, predictability, and stability. Any disturbances, like sudden weight loss or gain, trigger an alarm system to minimize the impact of those changes, and make sure you stay balanced and healthy.

“If you’re starving and losing weight, your brain shuts down energy-consuming process it deems non-critical, like bone formation and reproduction. It puts all its resources to keeping every inch of fat,” says Professor Herbert Herzog, whose team led the study at Sydney’s Garvan Institute of Medical Research.

“On the other hand, if you continuously over-eat, your brain recognizes there’s excess energy; and since too much stored fat is dangerous, it has systems in place to get rid of excess calories in a different way.”

One of those systems is the so-called ‘brown fat’. Recent discoveries into brown adipose tissue are redefining the meaning of ‘good fat’. This special type of fat is remarkable for its ability to burn excess calories as heat — instead of storing them, leading to weight gain.

“When you’ve eaten too much,” says Prof Herzog, “brown fat is activated to get rid of excess calories through heat — a process called diet-induced thermogenesis — to try and keep your weight stable.”

“What we’ve discovered,” adds Dr Lei Zhang, team leader on the project, “is that the brain triggers this response. It can sense what’s happening, it knows there are too many calories around. And it switches on brown fat through a receptor called NPFFR2 — found on specialised neurons in a region of the brain called the hypothalamus.”

In their study, out in Nature Communications today, Prof Herzog and his team found that mice lacking NPFFR2 showed no signs of brown fat activation and got much fatter when they were fed a high fat diet (which would normally cause diet-induced thermogenesis).

A closer look at NPFFR2 revealed that it controls the alarm bell: a protein known as NPY — which goes off when there are drastic changes in weight.

“When you’re starving, NPY levels get very high and this shuts down brown fat activation to conserve energy. And when you lose NPFFR2, you get a massive drop in NPY levels, which also causes brown fat to shut down, because your brain is not getting any signals about how much energy is around, and so excess energy instead turns into fat,” explains Prof Herzog.

“But when NPFFR2 is active and NPY is able to maintain the energy balance, it can sense too many calories and so NPY levels will drop slightly. That’s when the greatest amount of brown fat activation is possible.”

These findings suggest that fine-tuning the NPFFR2 signal — and NPY as a result — could be a way to maximise brown fat activation, and help burn excess energy before it’s stored as fat.

But turning extra calories into heat is not the only way of getting rid of them.

“When you eat too much, and diet-induced thermogenesis is switched on, your body also reroutes some of that energy to bone formation. So you get more bone in anticipation of the weight gain from some of those extra calories,” says Prof Herzog.

“So there might be an opportunity to fine-tune the regulation of NPFFR2, to shuttle more of that excess energy towards heat and bone formation, rather than stored fat, providing two possible routes to avoid weight gain.”

At Garvan, we’re committed to saving and improving quality of life.  With a fully integrated approach, we make breakthroughs in treatment and prevention that will help everyone.