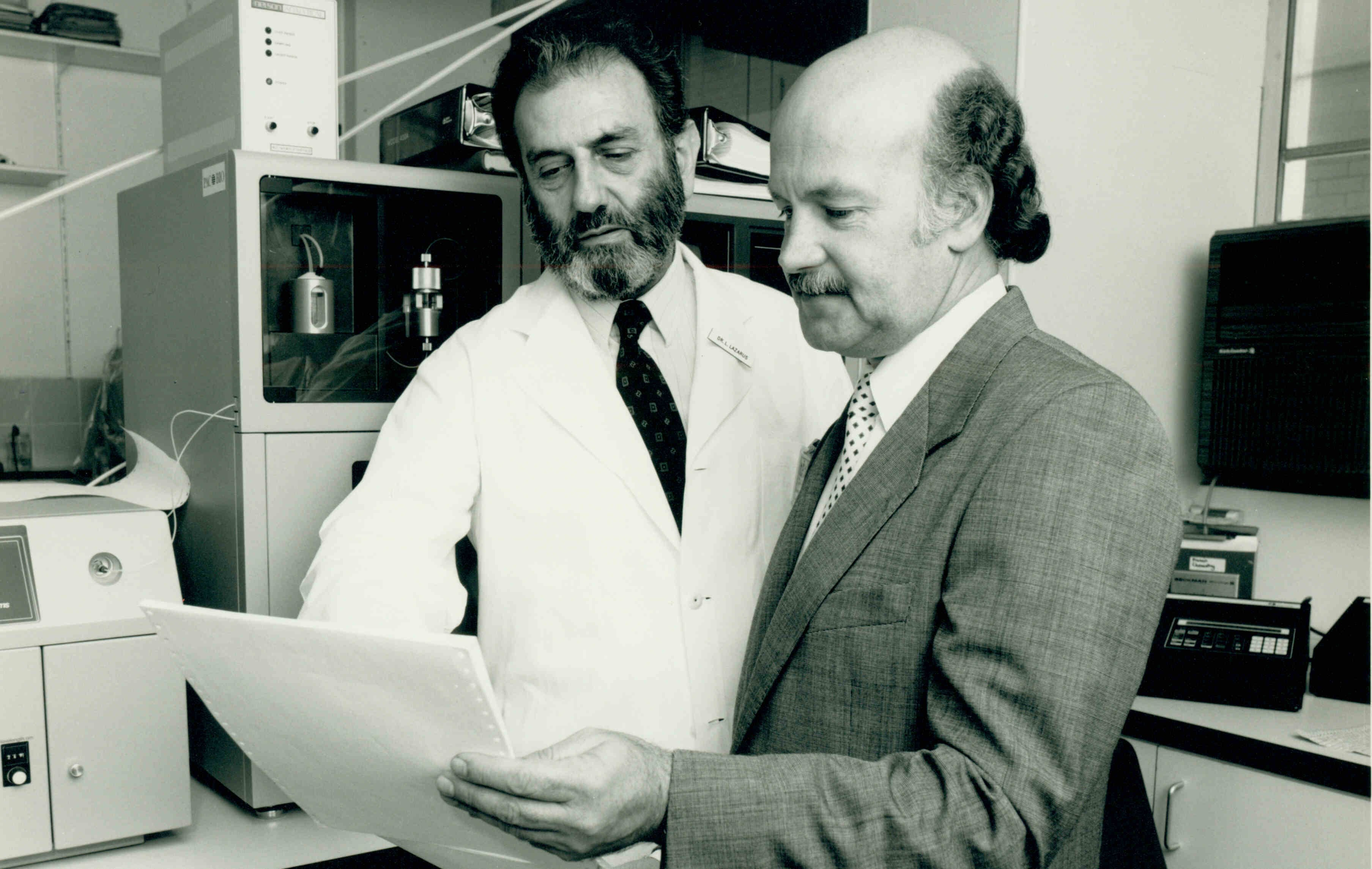 Professor Les Lazarus MBBS MRACP FAACB FRACP FRCPA AO, the first Executive Director of the Garvan Institute of Medical Research and one of the first trained endocrinologists in Australia, has passed away at the age of 93.

Born in Sydney in 1929 to British immigrants, he hoped for a career that would offer “a background in science, and involvement with people at the same time”.

After graduating in 1953 and taking up a two-year scholarship to Middlesex Hospital in London in 1960, he returned to Sydney to establish Australia’s first endocrine laboratory, at St Vincent’s Hospital, in 1962. When Garvan was founded in 1963, Professor Lazarus’ lab (which he ran with close collaborator Margaret Stuart) was the first to take up residence, when the team relocated across the road to the then-new Garvan building.

With Dr Gerry Milton, Professor Lazarus became an inaugural Co-Director of Garvan in 1966. Three years later, in 1969, he became the first sole Director of the Institute. It was a role he was to hold for over 20 more years, until 1990. In his time as Executive Director, he oversaw momentous change, including the establishment and growth of three major research themes (diabetes and endocrinology, osteoporosis and bone, and cancer); the establishment of Garvan as an autonomous research institute; and major changes in the funding landscape.

Professor John Shine AC FRS FAA, who succeeded Professor Lazarus as Executive Director of Garvan in 1990, says, “Les Lazarus was a true pioneer in medical research who strongly believed that close collaboration between basic research and clinical practice was fundamental to improvements in health care. He recognised that new breakthrough technologies would be critical to help unravel the cause and treatment of complex diseases – a legacy which formed the core of Garvan’s research philosophy and which has continued to the present day.

“This insight was initially evident in his embrace and development of monoclonal antibody techniques in the 60s and the application of these to develop new immunoassays for a range of hormones – followed by his support for molecular biology and gene cloning in the 80s. Together with the close clinical association with St Vincent’s, this resulted in the Garvan Institute under Les’ leadership emerging as the leading independent medical research institute in Sydney,” Professor Shine continues.

Professor Lazarus made major contributions to the field of endocrinology, focusing on the hormonal triggers for breast cancer and prostate cancer, and on understanding the action of insulin in the body. In his work, he worked closely with many other leading researchers who remain close to Garvan, including Ken Ho, Ted Kraegen, Don Chisholm and Professor Lesley Campbell. A key highlight was the publication – 48 years ago – of a revolutionary and greatly simplified treatment for diabetic ketoacidosis, a life-threatening complication of type 1 diabetes (Kidson, Casey, Kraegen and Lazarus. BMJ 1974;2:691).

Professor Lazarus was awarded the Order of Australia in 1988, a testament to his important research and clinical work, and to his outstanding leadership in medical research.

After his retirement from Garvan, Professor Lazarus stepped into the role of Director of SydPath, St Vincent’s Hospital’s pathology service.

Professor Lazarus continued his interest in Garvan, attending key Institute events up until a few years ago, when ill health meant this was longer possible.

As a pioneer of clinical research in Australia his passing will be felt in the scientific community.