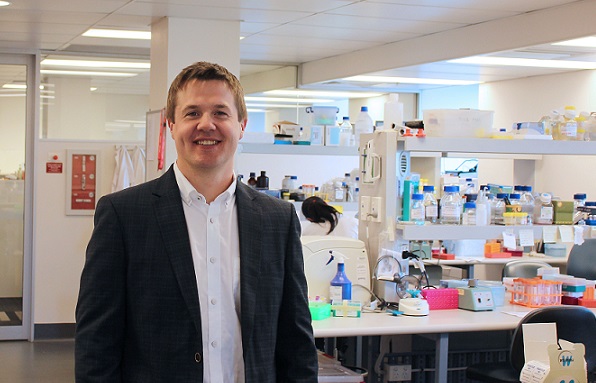 A study led by Dr Andrew Philp from the Garvan Institute of Medical Research, recently published in the Journal of Endocrinology, used experimental models to determine the effects of diet-induced vitamin D deficiency in the mitochondria of skeletal muscle cells.

Mitochondria are specialised organelles within cells that convert nutrients into energy, which in skeletal muscle is used to power the movements needed to perform everyday tasks.

“Our results show there is a clear link between vitamin D deficiency and oxidative capacity in skeletal muscle – an important measure of muscle health,” says Dr Philp. “The study is crucial piece of evidence that reinforces the central role that vitamin D plays in our health.”

Vitamin D is a hormone the body produces in response to sun exposure, and can be supplemented through fortified foods or oily fish. It is well known to be important for maintaining bone health and preventing rickets and osteoporosis, however in recent years, vitamin D deficiency has been reported to be as prevalent as 40% in European populations.

Multiple studies have also linked low vitamin D levels to poor muscle strength, particularly in older people. However, studying the role of vitamin D in muscle performance of older people has been difficult as other pre-existing health conditions can also affect their vitamin D status.

To investigate the relationship between vitamin D and muscle performance, Dr Philp and his team in the Garvan Institute’s Mitochondrial Metabolism and Ageing lab studied the effects of diet-induced vitamin deficiency on skeletal muscle mitochondrial function in mice.

Mice were either fed a diet with normal quantities of vitamin D, or without vitamin D, for a period of three months. Tissue and blood samples were collected monthly to quantify vitamin D and calcium concentrations and to assess markers of muscle mitochondrial function and number.

After three months of diet-induced vitamin D deficiency, skeletal muscle mitochondrial function was found to be impaired by up to 37%.

“Impaired mitochondrial function reduces the amount of energy produced in the muscles, which may lead to poor muscle function. Therefore, preventing vitamin D deficiency in older people may help maintain muscle performance and reduce the risk of muscle related diseases, such as sarcopenia.”

Dr Philp says that more research is needed to investigate the direct effect of vitamin D deficiency on muscle function strength in both mice and humans.

“We are particularly interested to examine whether this reduction in mitochondrial function may be a cause of age-related loss in skeletal muscle mass and function.”