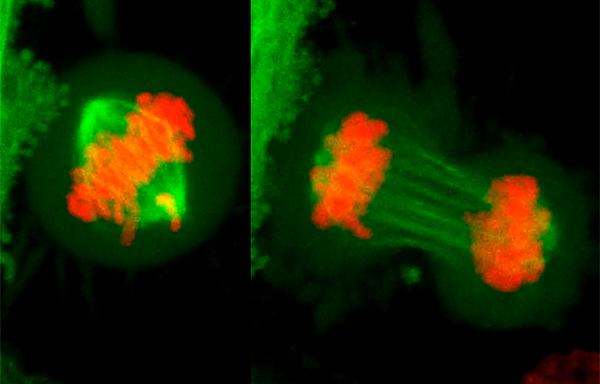 One to two million cells divide every day in the human body, a complex process that is strictly regulated. If cell division goes awry, normal tissue function is disrupted, contributing to conditions such as cancer, immunological disorders, neurodegenerative conditions and many others.

The intricacies of cell division, and how it is disordered in disease, are the research focus of Dr Andrew Burgess, Head of the Cell Division Laboratory in the Cancer Division of the Garvan Institute of Medical Research.

Dr Burgess worked with Professor Sean O’Donoghue, Head of the Biodata Visualisation team at Garvan’s Genomics and Epigenetics Division, and Office of the Chief Executive (OCE) Science Leader at CSIRO’s Data61, to illustrate the complex biology of cell division in an entirely new way.

Together they have produced an interactive graphical representation of cell division, published online today in the journal Cell as one of a series of popular ‘SnapShots’ that summarise a diverse range of cell biology topics.

The SnapShot, a one-page, interactive graphic, takes the viewer on a journey through ‘mitosis,’ the phase of a cell’s life cycle where the chromosomes are split in two before a single cell splits into two genetically identical daughter cells.

“Researchers can, at a glance, see which key proteins are at play at different stages of mitosis. They can follow them along biological pathways, observing where in the cell the proteins are active, which other proteins they interact with, and see whole chains of events that are set in motion as protein switches turn events on or off,” he explains.

“Our understanding of cell division has expanded enormously in the last decade. We know far more than we did before about the hundreds of ‘kinases’ and ‘phosphatases’ – proteins that beautifully coordinate cell division, by switching on or off tens of thousands of biological interactions within the cell.”

“Yet it can be remarkably difficult to make sense of how these interactions are coordinated, which proteins control which, and the precise timing, duration and cellular location of the interactions; that’s where the relationship between biologists, computer scientists and biodata visualisation experts proved to be key.”

Minardo was inspired by the work of Charles Minard, a nineteenth century French civil engineer and a pioneer in the field of information graphics. Having previously used Minardo to represent what happens when insulin strikes the surface of a fat cell, the researchers realised it would also be the perfect platform to unravel and illustrate the story of cell division.

Prof O’Donoghue says, “We developed Minardo to meet the needs of modern research, to analyse and interpret vast volumes of complex temporal data and to summarise them visually and clearly.”

The researchers worked with Dr Marcos Malumbres of the Spanish National Cancer Research Centre (CNIO) to collate and analyse information from research carried out at Garvan and CNIO, as well as over 270 other published scientific reports on cell division.

“Minardo allowed us to map that vast amount of information in a single interactive illustration,” says Prof O’Donoghue.

In the online version, hovering over a protein or biological pathway allows the viewer to see all associated events and gives access to a wealth of related information on mitosis.

Prof O’Donoghue says, “The staggering complexity of mitosis has never before been presented in this easy-to-understand way. This SnapShot will be used by researchers, young and old, for many years, as a visual encyclopaedia of cell division knowledge.”

Dr Burgess says that the new SnapShot makes it easier to understand how thousands of proteins work cohesively to facilitate cell division.

“For example, one key player is a protein called MASTL, which my lab has been researching for a number of years,” he says.

“MASTL acts as a ‘master regulator’ of the many kinases and phosphatases in mitosis, maintaining the delicate balance these two competing groups. It travels out of the cell nucleus as the cell enter mitosis, and acts to protect the chromosomes and cell from attack by phosphatases. Some of our latest research showed that MASTL is de-activated by a protein called PP1, providing a signal for the cell to exit mitosis and complete cell division.”

“For ourselves and for all cell division researchers, the new SnapShot illustrates how MASTL fits into the overall picture of cell division. By looking at cell division in this way, we can also quickly see multiple gaps where our current knowledge is limited, highlighting areas that need further research.”