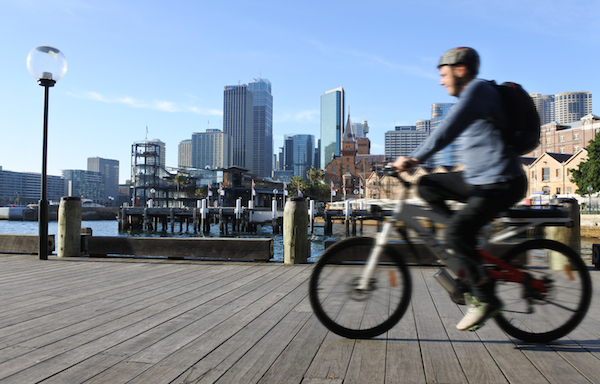 New Australian research has revealed that tiny protein-filled packages, called vesicles, are used by our muscles and other organs to communicate with each other during exercise. The research, published today in the high-impact journal Cell Metabolism, sheds new light on why exercise has positive health effects across the entire body.

Read more about the findings in the New York Times.

The study, from Sydney’s Garvan Institute of Medical Research, identified thousands of different proteins that are released into vesicles in our bloodstream – including hundreds that appear to act as signals that we are exercising. Most of the proteins have never before been thought to be involved in communication within the body.

Vesicles are tiny spheres, less than a thousandth of a millimetre in diameter, released from cells and found in their trillions in the bloodstream. Once thought to be cellular debris, we now know them to be important carriers of proteins and other molecular information.

Using a new approach, the researchers comprehensively analysed the protein contents of vesicles in the blood of people before and immediately after exercise (an hour of cycling) and following a period of recovery. They found many more vesicles in the blood samples of people immediately after exercise than in those at rest or after recovery – and, importantly, many proteins enclosed within the vesicles were present in greater amounts after the exercise bout.

“We’re seeing a big burst of vesicles released when we exercise, and those vesicles contain a different mix of proteins – in other words, a different set of messages,” says Prof Febbraio.

The researchers went on to show, in mice and in cell lines, that exercise-liberated vesicles move through the bloodstream and accumulate predominantly in the liver and, in all likelihood, are taken up by liver cells.

Prof Febbraio says, “We have long known that muscle communicates with other tissues during exercise – but these new findings make it clear that there’s the potential for a whole world of organ-to-organ messaging going on that has previously only been hinted at. In particular, we’re seeing thousands of proteins that may be acting as messages between the organs of the body.”

Prof Febbraio explains, “Until now, when researchers went looking for evidence of molecular communications from muscle, they would limit their search to a particular class of proteins, which are known to be released from cells into the bloodstream..

“Those proteins have a special tag, like a molecular ‘postage stamp’, that marks them for release from cells. So, in the past, we and others would look only for proteins that had ‘postage stamps’.”

By contrast, the methodology developed by Dr Whitham and collaborators looks wider. It seeks to identify all proteins that are enclosed within vesicles in the blood (not just those with a ‘postage stamp’). The technique for isolating vesicles is relatively straightforward, and has been coupled with nanoflow ultra-high pressure liquid chromatography and tandem mass spectrometry, to achieve a deep analysis of the ‘vesicle proteome’ – a comprehensive list of proteins associated with vesicles in the blood.

The results have been startling.

“What we’re now seeing,” adds Dr Whitham, “is over 5000 identified proteins in the blood that we think are packaged into vesicles – and importantly, only a small proportion (a fifth) of those proteins have a ‘postage stamp’.

“That means that there are 4000-plus proteins that have now been identified, that have not before been considered as being involved in organ-to-organ communication. It’s really going to change our thinking about how different parts of the body communicate, and what they ‘say’ to each other.”

When the researchers compared the vesicle proteome, they found that over 300 proteins were significantly different between exercise and rest.

“We think these are the proteins that tissues such as muscles are sending out into the bloodstream, packaged into vesicles, when we exercise – so it’s fascinating to look at what those proteins are, and what the purpose of sending them into circulation might be,” says Dr Whitham.

Prof Febbraio cites one group of proteins that are found in exercising vesicles.

“Several of the enzymes in the glycolysis pathway – which is an early step in accessing the energy from the food we eat – were present at higher levels in exercise vesicles than before or after exercise.

“Broadly speaking, we think that tissues are likely to be sending messages that help other tissues respond to exercise and to reap its benefits – so this is an intriguing example where muscle or liver cells could send glycolytic enzymes rapidly to other organs, to help them deal with the increased energy demands that go along with exercise.”

The researchers looked closely at where in the body the exercise-liberated vesicles were going. They found, in mouse studies, that many were being delivered to the liver. They showed that proteins on the surface of the vesicles may act as a molecular ‘postal address’, giving individual vesicles instructions about where to go.

Prof Febbraio says, “It makes a lot of sense that many of these exercise-liberated vesicles may be emanating from muscle and heading to the liver, because we know that liver function is vastly improved by regular exercise.

“We anticipate that, when we examine our findings further, we may find ‘postal addresses’ that send exercise vesicles from muscle to other organs. We’ll be looking, in the first instance, for evidence of vesicle delivery to the brain – which could shed light on why exercise impacts so positively on mental health.”

About the Garvan Institute

The Garvan Institute of Medical Research is one of Australia's largest medical research institutions and is at the forefront of next-generation genomic sequencing in Australia. Garvan’s main research areas are: cancer, diabetes and metabolism, genomics and epigenetics, immunology and inflammation, osteoporosis and bone biology, and neuroscience. Garvan’s mission is to make significant contributions to medical science that will change the directions of science and medicine and have major impacts on human health. www.garvan.org.au