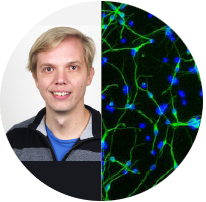 In some cases, autism spectrum disorder can be traced back to a single gene, but those cases are rare. A team of Garvan researchers, led by Dr Robert Weatheritt is beginning to explore beyond single genetic changes and investigate how the DNA, and in particular protein-coding regions, are controlled and expressed.

A key regulatory process controlling protein function is ‘alternative splicing’', which facilitates the stitching together of genes in novel and unique ways. Alternative splicing is particularly prevalent in the nervous system and our research has shown it is misregulated in a third of autism spectrum disorder cases.

By examining why and how this misregulation occurs, we aim to develop novel therapeutic strategies for reducing symptoms related to ASD.

Investigating the impact of misregulation in alternative splicing, however, is slow because of lagging technology and expertise. However, due to the advent of ground-breaking technologies in microscopy, genetics and neuroscience, we can now explore how a cell operates, how tissue-specific molecular machineries achieve optimal functionality, and how the dysfunction of this system leads to disease. This study will identify targets that are within the druggable genome, with the view to use them to develop the first ASD drug treatment.

Given the extent of alternative splicing misregulation in human diseases ranging from cancers to muscle dystrophy and neurological disorders, these findings will have extensive implications across a wide range of basic and clinical fields.