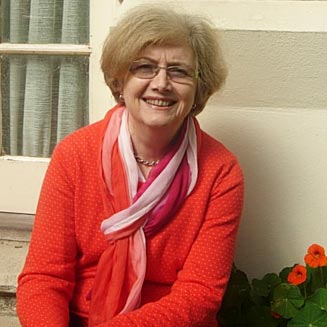 Dianne Olds was first diagnosed with pancreatic cancer in February 2012, at the age of 66. She had had no previous symptoms, but suddenly developed jaundice and a blood test and scan confirmed the tumour.

‘I was told it was not operable and started on gemcitabine chemotherapy,’ said Dianne. A stent was fitted for the liver blockage, but Dianne suffered repeated infections requiring hospital admissions and the removal of her gallbladder.

Then Dianne was told of a study at Garvan using a combined chemotherapy of abraxane with gemcitabine. Although she couldn’t join the study, Dianne did opt to try this, even though the cost was almost $1000 per weekly dose.

‘After two months on the combined treatment, my tumour had shrunk so dramatically that surgery became an option.’

Dianne was able to have a Whipple’s procedure (removal of the head of the pancreas and duodenum) in August 2012, followed by six weeks of radiotherapy and two more months of gemcitabine chemotherapy. ‘Certainly I was a few months recovering from all of this, which impacted greatly on my family, especially my husband, who took on the running of the house in addition to his own demanding job and getting me to appointments, but by the following May, I was well enough to travel to London for a month.

‘Although things are back to normal, I don’t take my recovery for granted. I am aware of many pancreatic cancer sufferers, close friends included, who died within a year of diagnosis. It is certainly the result of advances from the Garvan Institute and in surgical techniques that I am alive and well today.

‘During the Whipple’s procedure tissue was taken for genetic analysis, meaning that should I have a recurrence, the treatment can be better tailored to my type of tumour. My journey with the disease has been easier and better informed because of these advances in research. 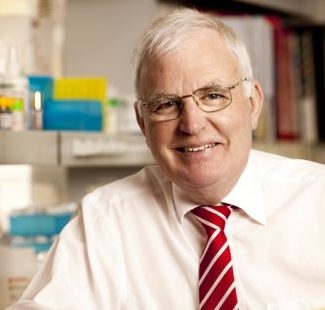 Luckily though, after several further tests, Rob was deemed suitable for surgery and underwent a Whipple’s procedure under the expert team led by Associate Professor Jas Samra at Royal North Shore Hospital. He made a remarkable recovery from this massive surgery and was discharged 10 days later. Rob enjoyed another 12 months of relatively good health until he was diagnosed with inoperable metastases in July 2012. He died three months later on the 10th October at the age of 65.

‘Rob was in the extraordinary position of not only being involved in the research, but of providing tissue as well.’

Each patient’s situation is unique, but Rob’s was particularly so in that he had dedicated the whole of his career to cancer research. He was the Director of the Cancer Research Program at the Garvan Institute, Sydney, and the inaugural Director of The Kinghorn Cancer Centre. As such he was a key member of the Pancreatic Cancer Group led by Professor Andrew Biankin who, along with Professor Sean Grimmond from the University of Queensland, established the Australian Pancreatic Cancer Genome Initiative. Their first paper, as part of an international collaboration, was published in Nature in October 2012.

Several hours into Rob’s surgery I received a phone call from Andrew Biankin who, with his infectious and incorrigible enthusiasm, informed me that he was on his way back to the Garvan with Rob’s tissue! So Rob was in the extraordinary position of not only being involved in the research, but of providing tissue as well.

It is remarkable how much Rob went on to achieve over those last 15 months. He did not allow his diagnosis to define or deter him, returning to work after only two more weeks at home. At the end of July 2011 he beamed with pride and delight at our eldest daughter’s wedding. He went back to enjoying fine food and fine wine. As a Kiwi, he was a passionate All Blacks’ supporter. When Associate Professor Eva Segelov, his wonderful Medical Oncologist at St. Vincent’s Hospital, was working out Rob’s 6 month adjuvant chemotherapy schedule, I could see Rob sitting there working out the dates in his head while she waited patiently, but looked somewhat perplexed. Eventually I quietly said, “he’s trying to work out if there will be any clashes with the Rugby World Cup”, to which she smilingly replied, “that’s no problem, I’ve had patients who have had to work around their Botox treatments.”

The outcome was that Rob was able to have one of his treatments in Christchurch. Following the All Blacks’ victory in the final at Eden Park, Rob’s brother, Alistair, protectively led him to the waiting buses, but they were the only two on the bus. No-one else wanted to go home.

Rob made sure that we returned to New Zealand many times over that 15 months, not only so Rob could attend the Rugby World Cup, but to spend time with his brother Alistair and his family, and with his closest friends from his Lincoln University days, Dave Shepherd, John Palmer, Oli Ryan and many others. He also wanted to spend some time in his family home in Ashburton which we had kept, and to enjoy picnics and drives along the rivers and up the gorges of his beloved homeland. At Easter the whole family enjoyed a return to our annual holiday at South West Rocks and in May, Rob and I travelled to Kuala Lumpur where Rob was awarded an Honorary Fellowship of the Royal Australasian College of Surgeons.

Following his diagnosis of metastases, Rob wanted to go somewhere warm so we spent a week in Port Douglas with our youngest two. He decided against second line therapy which can have debilitating side effects saying, “do you really live longer or does it just feel longer because you feel like crap?”

By August Rob was battling increasing pain but, with an enormous show of strength, he was able to achieve his final triumph by attending the opening of the Kinghorn Cancer Centre on the 28th August. Rob was the initial visionary and key driver of this joint venture between St. Vincent’s Hospital, Sydney, and the Garvan Institute. It was modelled on his idea of “bedside to bench”. Its aim is to enable research findings to be rapidly translated into clinical application in a personalised medicine model of cancer management – the right treatment to be delivered to the right patient at the right time.

It became increasingly difficult to manage Rob’s debilitating pain at home so he was admitted to St. Vincent’s Private Hospital. The children put aside their commitments to ensure that there was always someone at his bedside. Andrew flew back yet again from Boston, Sarah took leave and Rebecca and Charles put their studies aside. Alistair flew over from New Zealand several times to be with him as well. A bed was set up in Rob’s room and I was able to stay overnight. They have all expressed how important these last few weeks with Rob were to them and how they are so glad they were able to be there with him, even though his increasing pain medication meant that he was often not lucid.

The nursing staff were wonderful but we realised that Rob would not get home again so, after two weeks, we moved him to the Neringah Hospice in Wahroonga. This was a sad and difficult time as it was the final acceptance that Rob had only days to go. We did not have any experience with such a facility but can only say it was the most wonderful place for both Rob and we as a family to be for those final eight days. We were taught that death was a part of life with its own beauty and dignity.

One of Rob’s great friends and colleagues, Associate Professor John Grygiel, said, almost in wonder, “you know he never once complained”. 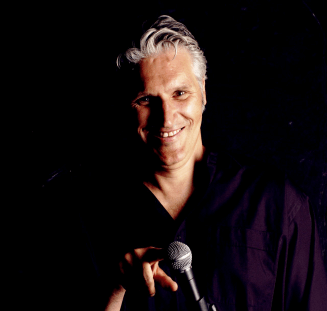 Karen Livingstone tragically lost her partner Dave to pancreatic cancer in 2009. Here, she shares her story.

Dave Grant was a father of three to Marieke, Madeleine and Spencer. He was also one of Australia’s best live stand-up comics. A funny man. Throughout his career, Dave had promoted men’s health, wellbeing and positivity through his comedy. He had a reputation as the fittest man in comedy. Dave ran everyday on the beach and he went to the gym 4 times a week.

‘How do you explain to your 9-year old son and 13-year old daughter that their dad has a 5% chance of survival? It was like your worst nightmare and then some.’

In April 2009 he was 50 years old when he sought diagnosis from his GP after suffering DVTs in his leg. Dave wasn’t too concerned. He flew a lot around the country entertaining and making people laugh. After all, they called it ‘economy class syndrome’, didn’t they? Dave was admitted for tests immediately.

Easter 2009 was a grim time. It turns out deep vein thrombosis (DTV) can be a symptom of undiagnosed cancer. Dave was diagnosed with a tumour on the head of his pancreas – considered inoperable. Devastation followed. How do you explain to your 9-year old son and 13-year old daughter that their dad has a 5% chance of survival? It was like your worst nightmare and then some. There was no more laughter. The outpouring of love and support by Dave’s beloved comedy fraternity was immense. They performed around the country to raise money to keep their family afloat.

Dave never coped with his diagnosis. His mind had so many questions that could just never be answered. His pain and suffering was vast. Our children had to watch every day as their father grew weak and skeletal. There was no hiding from pancreatic cancer. Dave passed 10 months later in January 2010, two days after his 52nd birthday. The suffering for our family didn’t end there. The grief and loss felt by our children has been so extensive, many years later they still don’t understand, and neither do I. Why him?

Will you help us to understand the causes of pancreatic cancer? Please support the amazing work of the Garvan Institute in unlocking the secrets of this horrific disease. If it can strike down a seemingly fit, middle-aged man, it could strike down anyone.