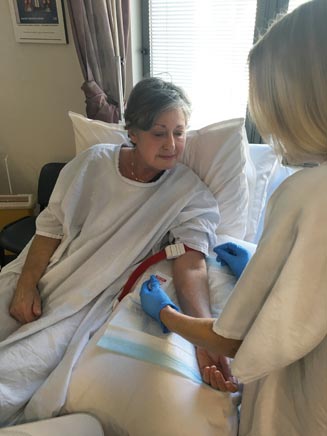 Insulin is an important hormone produced by the pancreas, a small organ located behind the stomach. After eating food, glucose enters the blood stream and triggers the release of insulin to help glucose be moved into cells so it can be used for energy.

The process of converting food into energy to sustain life is called metabolism. In people with T2D, changes in metabolism result in the body becoming resistant to insulin and over time that can lead to a drop in insulin production.

Insulin resistance, a key feature of pre-diabetes, metabolic syndrome and T2D, reduces the body’s ability to process glucose for energy. As a result, blood sugar (glucose) rises, weight gain is more likely and the resistance to insulin starts to increase.

High levels of blood glucose in T2D can cause damage to blood vessels, nerves and other organs that can have serious complications like kidney failure, lower limb amputation, blindness and cardiovascular disease. People with T2D are up to five times more likely to have heart-related problems such as strokes.

There are more than 1.7 million people with diabetes in Australia, with around half undiagnosed. In the last 20 years the number of Australians diagnosed with diabetes has trebled and 275 people develop diabetes every day, costing Australia up to $10 billion per year.

Type 2 diabetes (T2D) usually develops in adults over the age of 45 years, but is increasingly common in younger age groups including children, adolescents and young adults.

We do not know what causes T2D, but it is more likely in people with a family history, or females with previous diabetes in pregnancy. Ethnicity can add risks too, including for Chinese, South Asian, Indian, Pacific Islander and Aboriginal and Torres Strait Islander backgrounds. Other risk factors include heart disease, high blood glucose levels or impaired glucose tolerance.

T2D is very strongly linked with lifestyle risks as well, such as a BMI higher than 25, waist measurements and abdominal fat levels. In fact Garvan’s research shows that fat directly around organs in the stomach, rather than fat under the skin, is a major risk factor.

The role of metabolism and fat

Two in three Australian adults are overweight or obese, which can be accompanied by a number of health problems, including T2D, insulin resistance, high blood pressure and an abnormal blood lipid – or fat – profile. T2D is one of the major consequences of obesity. The combination of changes to diet and food supply, along with reduced physical activity and more sedentary work and leisure, means global populations are seeing more obesity – and more T2D.

Unhealthy diets and sedentary lifestyles cause weight gain, pre-diabetes and T2D. Excessive consumption of carbohydrates is associated with insulin resistance, even in the absence of weight gain. It is thought that excess sugar in the diet leads to deposition of fat in the liver and in the deep abdominal area, both of which are strongly related to insulin resistance and T2D.

The deposition of fat in the central abdominal and in insulin-sensitive tissues, such as muscle and the liver, creates insulin resistance in pre-diabetes and T2D. As the body can’t use insulin effectively, it is forced to produce even more insulin to compensate. However, the strain of producing extra insulin means the pancreas is overworked and begins to fail. The increasing amounts of insulin in the body also cause the body to become gradually more resistant to it.

With T2D, many people have no symptoms at all, while others develop signs as they age. Sometimes people think their symptoms are a normal part of ageing.

An estimated 2 million Australians are at high risk of developing T2D and its complications, such as a heart attack, vision problems or foot ulcers.

Diabetes is diagnosed by a blood test. The test may be either a fasting test (no food or fluid except water for eight hours, say overnight), or a random test taken anytime during the day, or an Oral Glucose Tolerance Test (OGTT).

Type 2 diabetes is diagnosed when:

The severity of complications from T2D depends on the duration of the illness, but fortunately can be delayed or even prevented by early detection and treatment. Diagnosis is made by either a Fasting Blood Glucose (FBG) or Oral Glucose Tolerance Test (OGTT).

T2D is managed with a combination of regular physical activity, healthy eating and weight reduction. As T2D is often progressive, most people will need oral medications, or for some, insulin or insulin-like injections over time.