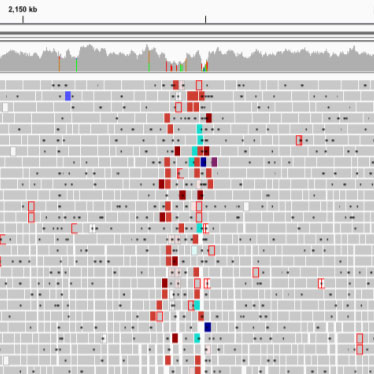 Genomic mapping of the PKD genes

Polycystic kidney diseaseis a genetic disease that is incurable and requires the control and management of various lifestyle factors to slow progression. This includes keeping active, looking after blood pressure and keeping to an appropriate diet. Over time PKD can lead to kidney failure, also known as End Stage Kidney Disease (ESKD), which will require kidney dialysis or transplant for continued survival.

Autosomal dominant PKD (ADPKD) is often diagnosed at a later stage when symptoms first appear. This is done by using ultrasound imagery to detect cysts in the kidneys; however, this does mean that the cysts need to be large enough to be seen, and often need more than one cyst for diagnosis. ADPKD resulting in mutations from PKD1 are generally faster progressing than those with PKD2 mutations though it is unclear why that is.

Autosomal recessive PKD (ARPKD) is quite rare and will generally be picked up quite early, during infancy or even while the baby is still in the womb. They can be born with breathing difficulties due to the enlargement of the kidneys and liver. Kidney failure can often develop in children with ARPKD before they reach adulthood.

Those who have one or two parents with a genetic mutation in PK1 or PK2 are at high risk of inheriting the same mutation and developing ADPKD. There is a 50% chance of the parent passing the genetic mutation to their child. Symptoms often develop at about 30-40years old, but can occur earlier or later, with those with a PDK2 mutation often developing symptoms later in adulthood. Those with the mutation in the PDK1 gene generally have a more severe and faster progressing form of PDK. Although it affects men and women equally, women are more likely to develop liver cysts. Women may also have preeclampsia or high blood pressure during pregnancy, and men may develop cysts on their seminal vesicles.

Spontaneous ADPKD, which occurs when the genetic mutation is developed later in life rather than inherited, is more likely to happen in those who have other chronic kidney issues.

Those who have two parents with a genetic mutation in the PKHD1 gene are at higher risk of developing ARPKD. Both parents must have this mutation, and there is a 25% chance of passing on the genetic mutation to their child. The quicker the diagnosis, especially within the womb, the better the prognosis will be. About a third of babies born with ARPKD will die within the first week. Those that survive the first few weeks will have a higher chance of surviving to adulthood, though they will need treatment for the rest of their lives and are likely to need a transplant or dialysis earlier on.

Symptoms and resulting complications develop once the cysts are large enough to disrupt normal kidney functions.

Symptoms for ADPKD generally start in adulthood and include:

Symptoms for ARPKD can be detected whilst still within the womb and can include:

ADPKD is normally diagnosed when symptoms appear. This may not happen until it has advanced past the early stages and multiple, larger cysts have grown. Ultrasound imaging combined with a positive family history is used to confirm the disease; however, it is important to note that ultrasound imaging may not pick up PKD until the cysts are already quite large and have multiplied. Genetic testing is available, but is an expensive and long process with low accuracy.

Diagnosing ARPKD may be done when using ultrasound imaging during pregnancy, or when observing obvious signs and symptoms arise during childbearing.

Other imaging tests used to diagnose PKD can include computed tomography (CT) scans and magnetic resonance imaging (MRI). Blood pressure and urine tests can also be used during diagnosis for both ADPKD and ARPKD.

There is currently no cure for PKD. Treatment revolves around managing symptoms and lifestyle choices to slow down the progression of the disease. These include: