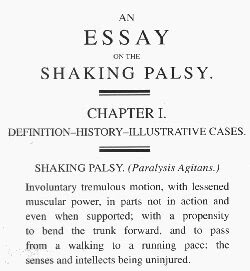 Dr James Parkinson is most famous for publishing 'An Essay on the Shaking Palsy' in 1817, which established Parkinson’s as a recognised medical condition.

He was a pioneer not only in medicine but also in his scientific and political interests.

The son of an apothecary and surgeon, he was born on 11 April 1755. This is why Parkinson’s Awareness Week is in April each year, and 11 April is now World Parkinson’s Day.

James Parkinson studied at the London Hospital Medical College, qualifying as a surgeon in 1784 when he was 29.

After the death of his father in 1784, James Parkinson took over 1 Hoxton Square in Shoreditch, London, where he lived most of his life and practised medicine. A commemorative blue plaque can be seen on the house that now stands on the site.

James Parkinson was a social reformer and political activist who championed many causes. He wrote many pamphlets that were highly critical of the political system of the day and advocated reforms such as representation of the people in the House of Commons and universal suffrage.

In later life, James Parkinson took on other responsibilities with humanitarian goals, highlighting the importance of the welfare of children who worked as apprentices. He uncovered abuses and encouraged reform of the law governing apprentices, in order to make reviews and inspections an integral part of the system.

Unfortunately there is currently no cure for Parkinson’s disease, although some of the movement symptoms can be alleviated for a time. The movement-related symptoms are mild at the start and often appear just on one side of the body. As they progress symptoms become more pronounced and appear in other parts of the body.

The characteristic Parkinson’s disease tremor can begin in the forearms, hands or fingers, especially when the limb is at rest, but the foot, mouth and chin can also be involved. Over time, PD reduces the ability to move and slows voluntary movements such as standing up or sitting down – also known as bradykinesia.

It also becomes difficult to initiate walking and the gait is marked by shuffling feet, lack of arm swing and head down. Muscle stiffness can limit the range of motion and cause pain while posture may become stooped accompanied by balance problems and more frequent falls.

In later stages as the automatic movements of the muscles become slower, people with Parkinson’s may also experience:

The exact cause of Parkinson’s disease is unknown. There may be genetic causes for some patients and environmental causes for others – such as exposure to herbicides and pesticides in farm workers – but with a combination of environment and genes contributing to the disease for most people.

Who can develop Parkinson’s?

Parkinson’s disease is usually diagnosed around the age of 65, but one in 10 will be diagnosed before they are 45. Men are slightly more at risk of developing Parkinson’s than women.

There are currently no laboratory tests to definitively diagnose Parkinson’s disease and diagnosis is made by neurological examination. Testing can include reflexes, muscle strength and coordination, as well as Magnetic Resonance Imaging (MRI) and blood tests to rule out the possibility of other diseases.

Parkinson’s disease is usually diagnosed around the age of 65, but one in 10 will be diagnosed before they are 45.

The information provided on this website is designed for informational purposes only. This information is not a substitute for professional medical advice, diagnosis or treatment. If you have any concerns or questions about your health, you should always consult with a suitably qualified healthcare professional.