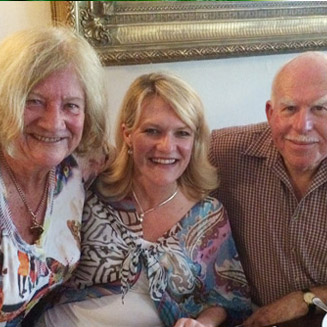 Paul and Wendy Jeans’ daughter Cathie was a vibrant, fit and busy wife and mother of three teenage boys. She was approaching her 49th birthday when she was diagnosed with gall bladder cancer at the end of 2014. ‘Cathie had had occasional abdominal pain and bloating and some gastric reflux, which was thought perhaps to have been gall bladder-related, though not sufficiently worrying to her GP to have any tests done,’ said Paul Jeans.

Our family has always been very close and Wendy and I have been deeply involved in Cathie and her husband Joe’s life, holidaying together, looking after the boys. Cathie’s diagnosis of gall bladder cancer and prognosis of only six months was just devastating.

‘Cathie was typically stoic and, as her diagnosis was somewhat inconclusive, we optimistically hoped that the tumour might have been a secondary metastasis from a potentially more treatable primary colon cancer.’

‘Indeed, Cathie was initially treated with chemotherapy drugs for colon cancer, but after a number of failed courses and the deterioration of her liver function, in March 2015 Cathie underwent a major operation to install stents and bypass part of her bowel. She also underwent a course of chemotherapy drugs for gall bladder cancer, but this treatment did not produce any improvement either.

‘Through my association with University of Newcastle and the Hunter Medical Research Institute, it was suggested that we have Cathie’s genome mapped to find chemotherapy drugs that may be effective in her particular case. This analysis confirmed that her current chemotherapy drugs would be unlikely to work, but it also suggested that two other drugs, not normally used with gall bladder cancer, may have potential.’

After three cycles of treatment, this third combination of chemotherapy drugs resulted in an 80% reduction in Cathie’s cancer markers, but by then it was too late to save Cathie. She died at the end of August 2015.

‘Cathie’s brave fight had totally exhausted her, and the complexity and seriousness of her situation meant that she spent most of her last six months in hospital, rather than with her family. The impact of not only losing one’s child, but seeing her devastated physically and wracked with pain is the most painful experience a parent can have. You continue living, but it is in a world that is very different from the one you enjoyed with your child. Cathie’s husband, Joe, and three boys miss her enormously and Cathie’s sister and brother also continue to be deeply affected.’

The Jeans family has learned difficult things about ‘rare’ and less common cancers. ‘We now know that some rare cancers are extremely difficult to diagnose and many GPs are not equipped to do so. We also know that personalised treatment, determined through genetic analysis, is essential and it is possible that drugs designed for one purpose may work in another situation.

‘We need to try and determine people who may have a particular predisposition to rare cancers. We have experienced other cancers in our family, but none have been terminal. Our wider group of friends have not all been so fortunate. The public needs to be more aware of rare cancers and their significance to the Australian community.

‘The “soft” side of patient care is also extremely important in situations like Cathie’s. Some of her doctors lacked the necessary interpersonal skills and that, in itself, negatively impacted her condition.

‘Meeting Professor David Thomas at Garvan convinced us of the value of his ideas. Apart from his particular goals, his approach to the experimental model (large steps rather than incremental change requiring expensive and time-consuming trials) has real potential to change the way we go about medical research.

‘As a family, we are targeted philanthropists, we give to causes about which we are passionate. Remembering Cathie is of the utmost importance to us and we feel we can do that most effectively through supporting Professor Thomas’s work at Garvan, and thereby making a real difference to others who may find themselves in her situation.’ 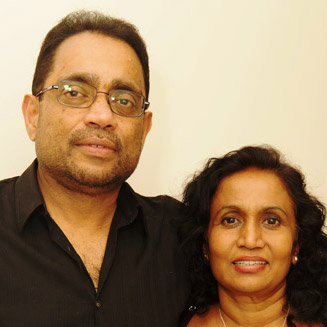 In 2012, doting grandad, Darin Mallawarachchi, age 59, was at home carrying his grandson when he slipped on the staircase and hit his tailbone. The ensuing scan revealed a 3cm chordoma tumour, a rare type of bone cancer, on the sacrum, the triangular bone just above the bottom tip of the spine. Darin had been in good health, going to the gym and very active. ‘Although I was lucky that the tumour was detected very early, it was still such a shock,’ said Darin.

‘We are a very close family – I have three grown-up daughters, and three grandchildren with another on the way. My whole family is very worried, and stressed.’

Following successful surgery to remove the tumour in September 2012, it took Darin, six long months to recover from postoperative complications.

On MRI scan in December 2013, a new 2cm tumour of was detected. This was treated with stereotactic radiation in March 2014, but unfortunately the tumour continued to grow. As a result, in March 2015, Darin underwent radio frequency ablation treatment, instead of surgery, to remove the tumour as far as possible. As the tumour was almost touching a nerve, saving the nerve meant not eradicating the whole tumour.

‘Follow-up scans, in October 2016, showed the residual tumour had increased in size, and in November 2016, I was treated with radio and microwave ablation therapy.

‘I would like to thank the doctors and surgeons who provided me with an excellent standard of care.

‘Now I have pains and aches at the base of my spine and right leg, which is also now weaker. Following all the procedures which I underwent, I also have bladder and bowel problems. In early 2017, I was enrolled into the MoST immunotherapy clinical trials program at Garvan, following introduction by Rare Cancers Australia. Hopefully the immunotherapy treatment can destroy the residual cancer cells, which are at the base of the nerve.

‘It is true that life is different now and I am not quite the same person as before, however, life continues to hold much happiness, and hope. I am able to keep positive. I have grown stronger and more determined to take each day as it comes and beat this cancer.

‘I am excited knowing that Garvan has made remarkable strides toward new treatments that will mean better outcomes for everyone affected by this rare disease. I hope that supporting and being part of Garvan’s research will help in finding a drug or medical solution in the future for those who are diagnosed with rare cancers.’

By August 2017, after six months on the trial, Darin’s cancer is responding to therapy and there is evidence that the tumour is shrinking. 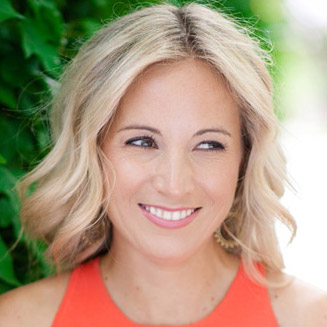 I’d been for a walk along the St Kilda foreshore at sunrise to commemorate it and reflect on how far I had come. It finally all seemed like a distant memory, but life can change so quickly. I spent my second birthday in three years recovering from surgery, waiting to find out if my cancer had spread.

Zara had a lumpectomy for her localised breast cancer, but then went on to have six weeks of daily radiotherapy to minimise the risk of recurrence.

‘It felt completely bizarre as a fit, healthy young woman, to leave my corporate job every day to sit in a white hospital gown, surrounded by people much older than me, waiting to be zapped by a machine so big it looked like it belonged on a space ship. While there were no visible signs of the side effects it was physically exhausting and mentally challenging.’

Zara then started the anti-hormone medication, tamoxifen. ‘My side effects were so severe I had to stop working. Just putting one foot in front of the other felt like a huge task. At its worst I felt hazy and couldn’t do basic things like drive my car. I’d burst into tears for no real reason. After 15 months, I stopped taking tamoxifen because of the degree to which it was affecting my quality of life.

‘Thankfully, my melanoma also hadn’t spread to any nerve or blood cells. I had surgery to remove all the surrounding tissue and didn’t require any further treatment.

‘It was an extremely difficult time for us all. I don’t think I’ll truly appreciate or understand what it must have been like for my mother until I have children myself, but I know that as a parent you want to do whatever you can to protect your child. To be in a situation like that and not be able to do anything, and also have to stay strong for your child, must have been awful and terrifying. It was when I received the call from my surgeon to say that my breast cancer hadn’t spread and my mum burst into tears with relief that I realised how worried she had been.

‘My mum was diagnosed with breast cancer one month after my breast cancer diagnosis. It was a different type of cancer to mine, and I tested negative for the BRCA gene mutation, so we are not sure whether they are genetically linked.

‘I consider myself very lucky to be cancer free, but the cancer treatments and stress from the two cancer diagnoses have taken their toll. I have learned so much because of this experience though and the knowledge I have gained, and continue to gain on this journey is hugely empowering.

‘I am really excited to be part of the Genetic Cancer Risk in the Young study. When I was first diagnosed with cancer four years ago, I was prepared to accept that I may never know why I got cancer. To think that I may soon know the reasons is absolutely mind-boggling. I am in awe of the work of the wonderful team of researchers at Garvan – the discoveries they have made fill me with great hope that we will see a cure for cancer in my lifetime.’