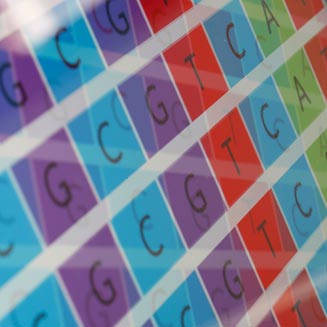 A genome is a complete set of instructions to make and operate an organism.

It also carries the information necessary for the cells to function.

What is genome sequencing?

In a sequencing laboratory, machines break the DNA up into manageable segments and read the order of the DNA bases or letters. Computers are then used to compare the DNA sequence with other sequences to locate the differences or variants.

The cost of DNA sequencing has dropped dramatically in the last decade. The first human genome sequences took years and cost more than $1 billion to produce. Now, sequencing technologies can sequence a person’s genome in days.

What can you find in your DNA?

The DNA sequence itself is a series of letters – A, C, G, and T – that represent the order of DNA units, or bases, that lie along the length of a person’s DNA. Because each person inherits one copy of their chromosomes from their mother and another from their father, there are technically more than 6,000 million letters to read and interpret. However, people’s genomes are remarkably similar, so only around 3-4 million differences are usually found between any two people alive.

Variants can provide different types of information about an individual:

However, our knowledge of the genome is far from complete. Researchers are unsure of the role that most gene variants play in health and disease. Understanding more about these variants—and when and why they occur—will help us better understand the causes of diseases such as cancer, and help improve their diagnosis and treatment.