Inheritance patterns describe how genetic variants are distributed in families. Understanding these patterns is crucial to predicting disease risk in family members of an affected individual.

Monogenic or Mendelian conditions refer to conditions caused by pathogenic variants in a single gene.  One or both alleles of a gene may be affected depending on the type of inheritance. 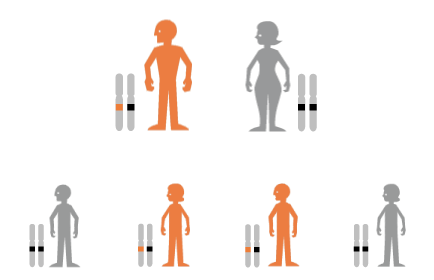 An autosomal dominant condition is one where only one copy of a gene with a pathogenic variant is necessary for an individual to be affected. This means that a person will be affected even if they are heterozygous.

Males and females are usually affected equally by autosomal conditions. However, this distribution can be skewed for conditions with variable penetrance or when only a small number of people are included in the family history.

If one parent is heterozygous for an autosomal dominant condition, then each of their children has a 50% chance of inheriting the genetic variant. However, reduced penetrance and/or variable expressivity may also influence the phenotype of the affected child.  There are generally affected family members in every generation. 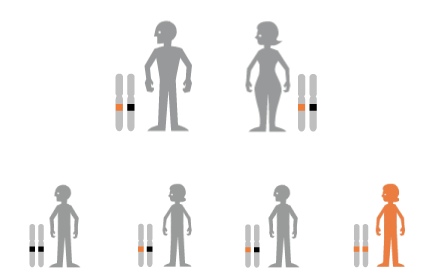 A person must have a pathogenic variant in both copies of a disease gene to be affected by an autosomal recessive condition. Individuals with only one copy of the pathogenic variant are referred to as carriers, and are generally asymptomatic.

Hereditary hemochromatosis is an iron overload disorder that follows an autosomal recessive pattern of inheritance. It is most commonly caused by two copies of C282Y variant in the HFE gene, also known as homozygous C282Y. More rarely, hereditary hemochromatosis is the result of compound heterozygosity. These patients will have one copy of C282Y and one copy of H63D. Both C282Y and H63D are SNVs within the HFE gene, their numbers signify the position of amino acid substitution. HFE gene encodes for a protein involved in iron metabolism. 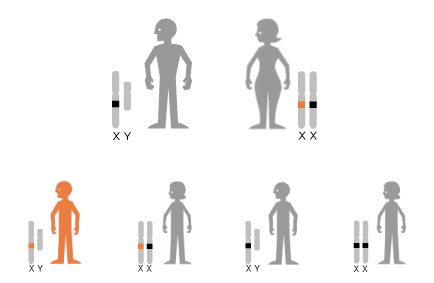 This refers to conditions where the associated pathogenic variant is carried on a gene on the X chromosome.

X-linked disease is generally more common in males than females because males only having one copy of the X-chromosome while females have two copies. The wide variability in penetrance and expressivity in females can be attributed to many factors including variability and randomness of X-inactivation, where one copy of the X chromosome is silenced in the developing embryo. Consequently, females heterozygous for an X-linked condition are often asymptomatic carriers, and have a chance of passing the condition on to their children despite not being affected themselves.

Father to son inheritance rules out X-linked conditions because only the Y chromosome is being passed on in this instance. 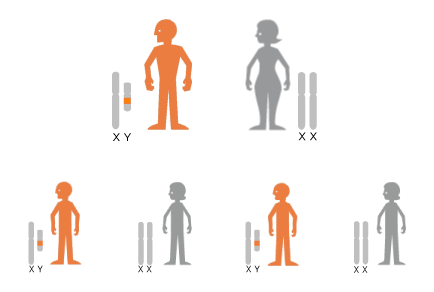 As only males have a Y chromosome, Y-linked variants can only be passed from fathers to sons and all sons will carry the pathogenic variant. 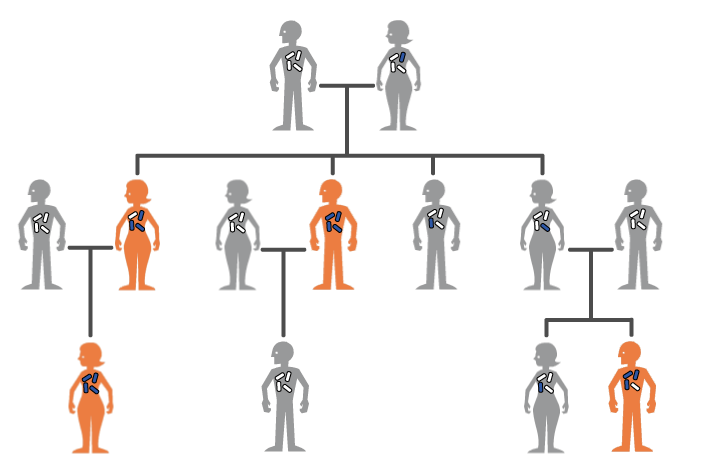 As a consequence, a mother with very few copies of pathogenic mtDNA variant may be asymptomatic, because she has adequate numbers of functioning mitochondria. However, it is possible for this unaffected mother to pass on this pathogenic mtDNA variant onto her future children, who may have different hetroplasmy ratios, sufficient to develop disease.

De novo variants are a type of variant present for the first time in a child, and not inherited from either parent. De novo variants can occur spontaneously during the formation of the egg or sperm cell, or shortly after fertilisation. This can explain scenarios where a child has a variant in every cell in the body that is not present in either parent’s genome, or has a genetic condition that is not present in their family.

If a variant is de novo, it is unlikely that the parents will have another child with the same condition.

The way in which the condition is passed on to subsequent generations will depend on the pattern of inheritance (ex. autosomal dominant).

A recessive disease may also be caused by the combination of a single inherited pathogenic variant and a de novo variant in the same gene.

Multifactorial or complex conditions are the product between multiple gene interactions and external factors such as environment and lifestyle choices.

The pattern of inheritance is difficult to define for complex conditions, however they often cluster in families.