The term ‘gene’ refers to a stretch of DNA that codes for a protein. The vast majority (98%) of the human genome does not encode functional proteins, and is referred to as non-coding DNA.

The diagram below shows the central dogma of molecular biology – the flow of genetic information from DNA to RNA, and then to a functional product (usually a protein). 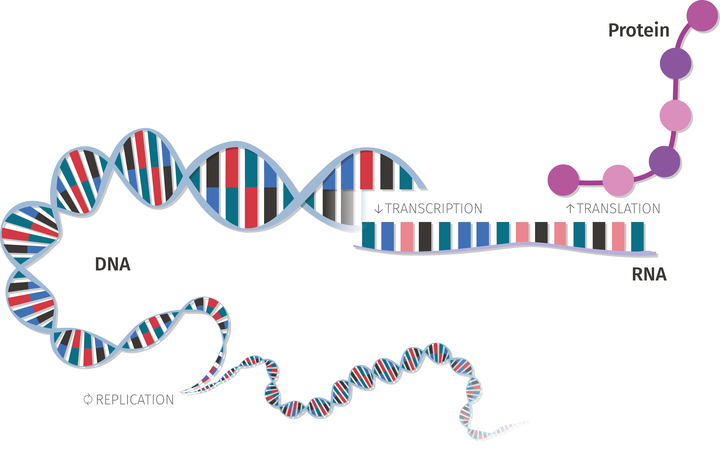 To review the process of transcription and translation:

From DNA to protein is created by yourgenome, Genome Research Limited and licensed under a Creative Commons Attribution 4.0 CC-BY License

Genetic variants are permanent alterations in an individual’s DNA sequence. These variations may or may not lead to a problem at some point in the central dogma. If they cause a problem, they are known as a pathogenic variant (or, less commonly, a mutation). The majority of variants identified in the genome are not pathogenic and are part of general population variation.

Pathogenic variants in genes are conserved through transcription and translation, and can end up changing, disrupting or losing the functional product.

For example, cystic fibrosis is caused by variants in the CFTR gene. This gene codes for the cystic fibrosis transmembrane conductance regulator, an ion channel protein that controls the transport of chloride ions from inside to outside of cells that line the lungs (and some other organs). The most common variant is a deletion of three nucleotides that causes the amino acid phenylalanine to not be incorporated into the polypeptide chain during translation. The resulting protein is non-functional because it does not fold correctly and is more readily degraded. This leads to abnormally thick mucus due to impaired movement of chloride ions and water to outside the cell.

Variants in non-coding regions also have the potential to cause or increase risk of disease. Non-coding DNA contains important regulatory regions that control when genes are expressed, as well as binding sites for molecules involved in transcription and translation. While knowledge of these regions is growing rapidly, it is still relatively limited. It is likely that non-coding regions have many other undiscovered roles in health and disease.

Each cell contains a complete copy of a person’s genome, encoded by DNA that is carried on 23 pairs of chromosomes – 22 pairs of non-sex chromosomes (autosomes) and one pair of sex chromosomes (XX for females and XY for males), plus thousands of copies of the mitochondrial genome. Each chromosome pair consists of one chromosome from each parent.

Autosomal genes and genes on the X-chromosome in females come in pairs – one from each parent. Genetic variants within only one copy of a gene are known as heterozygous, while those that affect both of a person’s copies are described as homozygous.

An allele is one alternative form of a gene that is usually defined by a genetic variant. Alleles can be classified as dominant or recessive.

Previous | Next: Genotype and  phenotype