Classification based on cell type:

Germline variants are variants in egg or sperm cells, and are able to be passed from parent to offspring.

Classification based on type of alteration:

This is a substitution of a single nucleotide for another. A SNV can be rare in one population but common in a different population.

Sometimes SNVs are known as single nucleotide polymorphisms (SNPs), although SNV and SNPs are not interchangeable. To qualify as a SNP, the variant must be present in at least 1% of the population. 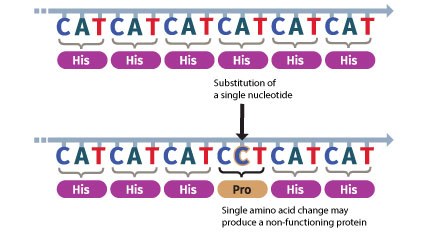 If a SNV occurs in a protein coding region, then this could result in either a

Short for insertion or deletion, this refers to a small length of DNA (usually less than 50 base pairs) that has either been inserted into or deleted from the genome. 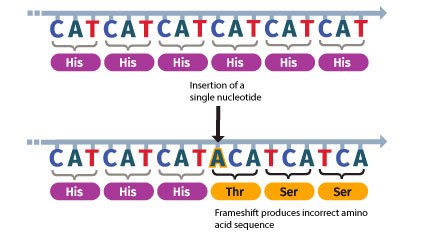 During translation, the mRNA sequence is read in groups of three bases (codons), with each codon corresponding to a particular amino acid. If the length of an indel is not a multiple of three, then it will likely result in a frameshift. A frameshift changes the reading frame of all the remaining bases resulting in the rest of the gene being incorrectly translated. This will drastically alter the product of translation, often leading to targeted decay of the mRNA .

This is a large (greater than 50 base pairs) rearrangement of part of the genome, and can be a deletion, duplication, insertion, inversion, translocation or often a combination of these. A copy number variation (CNV) is a duplication or deletion that changes the number of copies of a particular DNA segment within the genome. Structural variations have been implicated in a number of conditions, including polycystic kidney disease, cardiomyopathies, amyotrophic lateral sclerosis (ALS) and some cases of intellectual disability. 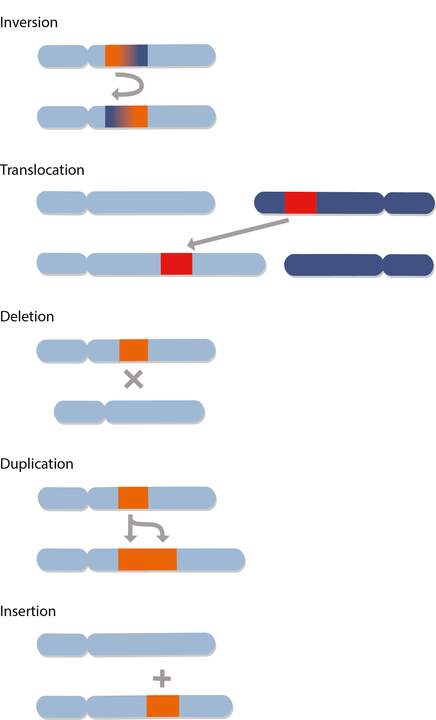