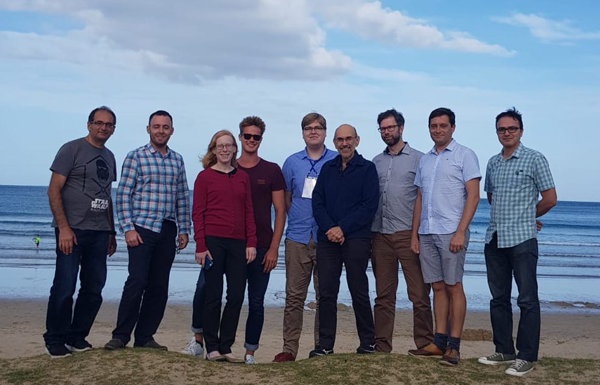 KCCG researchers at Lorne for the 2019 Lorne Genome conference

A number of KCCG researchers attended the Lorne Genome conference from 17-19 February.

Dr Mahdi Zeraati presented his work on the visualisation and genome-wide mapping of i-Motif DNA structure. I-Motif structures are tangled knots of DNA that are thought to play a crucial role in gene regulation, and their discovery was detailed in a Nature Chemistry publication last year.

James Ferguson had a poster on SquiggleKit – an open-source toolkit for manipulating Nanopore sequencing data that simplifies the steps of file handling, data extraction, visualisation and signal processing.

Tansel Ersavas presented a poster on deep convolutional neural networks for Nanopore signal processing – a strategy to improve the yield and accuracy of demultiplexed reads.

Genomic Technologies team leader Dr Martin Smith was invited to speak at a workshop on the applications of Nanopore long-read sequencing in translational research.

Outside of Lorne, Dr Smith was also invited to speak at:

Garvan’s Chief of Informatics and KCCG Informatics Team Lead, Dr Warren Kaplan, was invited to present at the Microsoft Campus Connections Summit in Redmond, USA from 5-8 February. Presenting on Genomics and our journey to the cloud, Dr Kaplan described how genomics powers all of Garvan’s research themes, and how Garvan is computing on-premise, at the NCI in Canberra, as well as on commercial clouds like Microsoft Azure.

The paper describes a technique for reducing the memory requirements of long read alignment to the human genome, through a combination of parameter optimisation, reference genome partitioning and multi-index merging. The team demonstrated that long reads can be aligned on a system with as little as 2GB RAM, with negligible impact on accuracy. This makes it possible for genomic analysis to be performed remotely, using the computational memory of a device as small as a smartphone.

Bronwyn Terrill, Education and Engagement Team Leader, was an author on Australians’ views and experience of personal genomic testing: survey findings from the Genioz study, published in the European Journal of Human Genetics in January 2019. This is the third paper from Genioz – the first large scale Australian study exploring attitudes towards personal genomic tests.