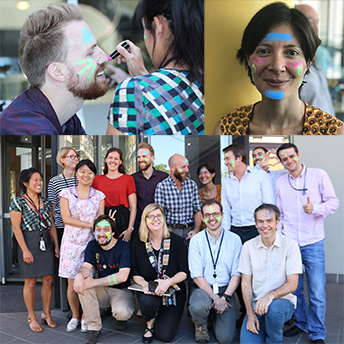 KCCG held its eighth capabilities showcase on 22 March, focusing on how diverse capabilities in software engineering, laboratory-based genomics and bioinformatics contribute realising the clinical value of the genome.

Dr Martin Smith presented on KCCG’s long read sequencing and analysis capabilities, Clare Puttick presented on challenges and tools for analysing the mitochondrial genome, and Dr Warren Kaplan presented on the work of the Informatics Program providing infrastructure to achieve scale in genomics.

His talk, Genomic Sequencing for Better Clinical Care and Better Research, focused on how genomic testing will impact the practice of medicine. He discussed the importance of connecting the research and clinical spaces, the challenges of developing a robust evidence base for genomic medicine, and the many opportunities that genomic testing affords for improving patient outcomes.

With staff from across the Garvan Institute, the KCCG participated in Rare Disease Day on 28 February, painting their faces to raise awareness for the millions of patients, families and carers affected by rare disease. 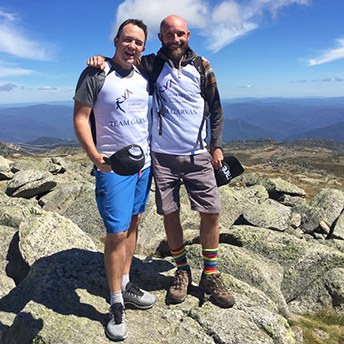 A team of Garvan staff climbed from Thredbo to the top of Mount Kosciuszko on 12 March to raise money for rare cancer.

The Garvan Genome Warriors, including Manuel Sopena-Ballesteros, Dmitry Degrave, Mark Cowley and John Grady from the KCCG, raised more than $5,720 as part of the Mount Kosciuszko Challenge.

This annual event is hosted by Rare Cancers Australia to raise awareness and funds for the more than 52,000 Australians diagnosed with a rare and less common cancer each year.

Mark Cowley and John Grady, two of the Garvan Genome Warriors team, at the summit of Mt Kosciuszko.