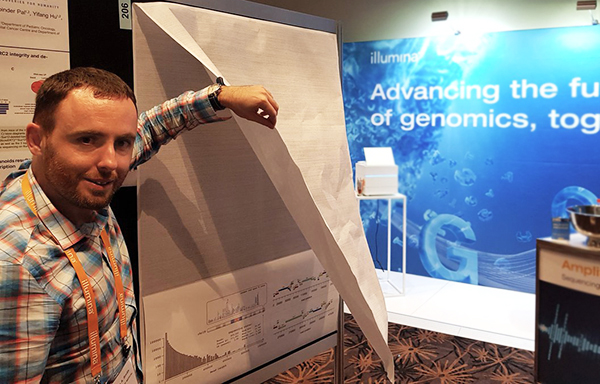 A number of KCCG staff participated in the Lorne Genome conference from 11 to 13 February.

Clare Puttick presented on ‘Whole Genome Sequencing for the Detection of Pathogenic Mitochondrial Mutations’, focusing on a tool she and the Genome Informatics team developed for detecting mitochondrial disease called Mity.

The following staff had posters at the conference:

Invited experts at the workshop

Bronwyn Terrill, Head of the Education and Communication program, was an invited expert at an international workshop in February to develop a comprehensive evaluation framework for genomics education.

The event was convened by the Australian Genomics Health Alliance, and twenty-four experts in genomics education and evaluation attended from Australia, the UK, USA and Canada.

The framework will support the development of high quality genomics resources both nationally and internationally, including by the KCCG Education and Engagement team and its collaborators, by providing a scaffold that can be used at various stages across resource development, from helping recognise an educational need through to evaluating impact.

Seave, a comprehensive variant filtration platform for clinical genomics developed by Dr Velimir Gayevskiy and Dr Mark Cowley at the KCCG, is being used by research groups across the country.

Dr Gayevskiy ran multiple training sessions on this platform at the end of last year. From 7 to 8 December, he ran a training session on Seave and mitochondrial disease for the AGHA Mitochondrial Flagship. The more than 20 attendees came from a variety of backgrounds, including clinical practice, bioinformatics and research.

He also trained two other research groups on using Seave during this time at the Murdoch Children’s Research Institute and the Melbourne Hospital.

Dr Mark Cowley, Tumour Genomics Program lead & Translational Genome Informatics co-lead was an invited speak at BioInfoSummer, presenting on translating genomics into the clinic for rare and advanced cancers on 7 Dec 2017. He also presented on clinical whole genome sequencing as an invited speaker at a Genomics education workshop for Genetic Counsellors on 9 March 2018.

Two members of the Genomic Technologies team, Dr Martin Smith (program lead) and James Ferguson, Genomic Systems Analyst, were both invited speakers at the Linux Conference Australia on 22 January 2018. Dr Smith presented on ‘Disruptive DNA Sequencing’ and James Ferguson, presented on ‘The not so secret source of Bioinformatics’. You can watch Dr Smith’s presentation here and Mr Ferguson’s presentation here. 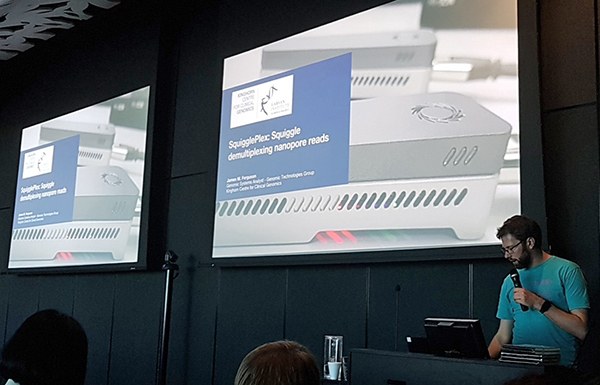 Dr Lisa Ewans, Dr Velimir Gayevskiy, A/Prof Marcel Dinger and Dr Mark Cowley all contributed to a paper Whole-exome sequencing reanalysis at 12 months boosts diagnosis and is cost-effective when applied early in Mendelian disorders, with collaborators from Garvan and a number of clinical services in New South Wales. It was published in Genetics in Medicine in March 2018.

Dr Warren Kaplan and Dr Mark Cowley contributed to a paper led by researchers at the University of Sydney and the Victor Chang Cardiac Research Institute, titled Mitochondrial CoQ deficiency is a common driver of mitochondrial oxidants and insulin resistance. It was published in Elife in February 2018.

Dr Brian Gloss and A/Prof Marcel Dinger authored a paper ‘Realising the significance of noncoding functionality in clinical genomics’, which as accepted in Experimental & Molecular Medicine in Marh 2018. They also contributed to a paper titled Identification of OAF and PVRL1 as candidate genes for an ocular anomaly characterised by Peters anomaly type 2 and ectopia lentis, published in Experimental Eye Research in January 2018.

Dr Emma Palmer, a KCCG visiting scientist, has contributed to two papers. The first was in collaboration with Dr Mark Cowley and Dr André Michoche from the Translational Genome Informatics Program, as well as the Genetics of Learning Disability Service at Hunter Genetics, the Robinson Research Institute at the University of Adelaide, and the Laboratory of Embryology and Genetics of Human Malformations at the Institut Imagine in France. The paper, A recurrent de novo nonsense variant in ZSWIM6 results in severe intellectual disability without frontonasal or limb malformations, was published in The American Journal of Human Genetics in December 2017.

The second was in collaboration with A/Prof Marcel Dinger and Dr Mark Cowley, as well as researchers from the Garvan Institute, the Faculty of Pharmacy at the University of Sydney, Sydney Children’s Hospital, SEALS pathology and the School of Women's and Children's Health at UNSW. Integrating exome sequencing into a diagnostic pathway for epileptic encephalopathy: Evidence of clinical utility and cost effectiveness was published in Molecular Genetics & Genomic Medicine in January 2018.

Dr Martin Smith collaborated with Prof John Mattick and researchers from the Garvan Insititute and the Center for Non-coding RNA in Technology and Health (RTH), University of Copenhagen on a paper titled DotAligner: identification and clustering of RNA structure motifs, published in Genome Biology in December 2017.