Abdominal fat and insulin resistance in normal and overweight women: Direct measurements reveal a strong relationship in subjects at both low and high risk of NIDDM

Insulin resistance appears to be central to obesity, NIDDM, hyperlipidemia, and cardiovascular disease. While obese women with abdominal (android) fat distribution are more insulin resistant than those with peripheral (gynecoid) obesity, in nonobese women, the relationship between abdominal fat and insulin resistance is unknown. By measuring regional adiposity with dual-energy X-ray absorptiometry and insulin sensitivity by euglycemic-hyperinsulinemic clamp in 22 healthy women, with a mean +/- SE body BMI of 26.7 +/- 0.9 kg/m2 and differing risk factors for NIDDM, we found a strong negative relationship between central abdominal (intra-abdominal plus abdominal subcutaneous) fat and whole-body insulin sensitivity (r = -0.89, P < 0.0001) and nonoxidative glucose disposal (r = -0.77, P < 0.001), independent of total adiposity, family history of NIDDM, and past gestational diabetes. There was a large variation in insulin sensitivity, with a similar variation in central fat, even in those whose BMI was <25 kg/m2. Abdominal fat had a significantly stronger relationship with insulin sensitivity than peripheral nonabdominal fat (r2 = 0.79 vs. 0.44), and higher levels were associated with increased fasting nonesterified fatty acids, lipid oxidation, and hepatic glucose output. Because 79% of the variance in insulin sensitivity in this heterogeneous population was accounted for by central fat, abdominal adiposity appears to be a strong marker and may be a major determinant of insulin resistance in women.

Researchers uncover the genomics of health 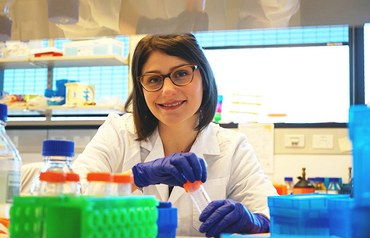 Study shines light on how DNA keeps its 3D shape